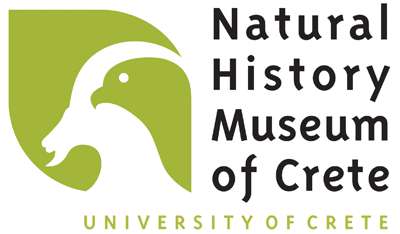 Natural History Museum of Crete (NHMC) was established as a department of the Faculty of Science of the University of Crete since 1980, being a pioneer institute at national and European level in several aspects of biological and geological diversity. The first aspect regards research on the environment of the Eastern Mediterranean at all levels, i.e. from basic to applied research, from the cellular to the level of the ecosystems, and from state of the art applications and techniques to management of protected areas and continuous interventions on environmental issues of local and national interest.

The NHMC focuses in studying aspects of the Eastern Mediterranean diversity in the fields of Geology, Palaeontology, Ecology, Evolution, Biogeography, Phylogeography, Phylogenetics, Systematics and Taxonomy. At present, four departments are fully operational: The Zoological, the Botanical, the Mineralogical and the Geological combined with the Paleontological department.

It is the only Natural History Museum in Greece, dealing with all aspects of natural environment and occupies a significant number of specialists in biological and geological diversity.

In NHMC permanent Exhibition Halls, of 3500 m2, in the city of Heraklion, Crete, the natural environment of the eastern Mediterranean area with special emphasis on Greece and Crete, is displayed. Additionally, having participated and participating in several national, European and international conservation and management projects concerning protected areas and priority species, NHMC has a vast in the field of conservation and management in Crete, with great results.

In 2012, NHMC was awarded by the Emmanuel Benakis prize of the Academy of Sciences in Athens for its complex educational, research, writing and publishing deed, its exemplary organization and structure that designate it as one of the most significant, for its specialty, museum globally, in which scientific research is being advanced and make it equivalent to similar foreign institutions and education sites.

Also, NHMC is awarded the Certificate of Excellence since 2013 by TripAdvisor (voted by the visitors as one of the excellent tourist destinations worldwide).